I’m going to be honest. I’m sick of reading my book.

That probably doesn’t sound like a ringing endorsement for FLASHFALL, but that’s just where I’m at this stage of the editing process, now that I’ve read it eighteen million-billion times.

People suggest taking a break, and coming back to your manuscript with ‘fresh eyes.’ I had a four-month break while waiting for my second round revision notes. Two weeks into editing, and my brain’s pretty much ‘what even are these words?’

Revision Fatigue has set in. So I break the edits down onto sticky notes, put them on my board beside my laptop, and tackle them a scene at a time. Between that, I take Emmy for walks and drink copious amounts of coffee. I wear my Gryffindor socks (because magic) and my t-shirt that says, I Can and I Will (because cozy encouragement t-shirts help, too.)

Still. As much as I whittle away my edits into a mountain of sticky-notes, another voice rises up, louder than my writer’s voice.

This is crap. This plot has too many holes. That doesn’t make sense. That’s cliché.

The voice of the Doubt Monster.

If you’ve ever written a book, or undertaken a creative endeavor, you’ve probably encountered your own.

So what can we do to battle the doubt? Here are a few things that help me:

Believe that you are capable of writing and re-writing your book to its fullest potential. It’s normal for the Doubt Monster to visit from time to time. Just don’t let it stay.

If you have any suggestions of your own, please post them in the comments! (Or tweet them at me: ) How do you overcome doubt? What helps you avoid ‘zombie brain’ when you’re revising? Please share!

For more, here’s a peek at my revision process:

Sometimes, when I’m deep in the Revision Cave, I run into walls that make me lose perspective. I focus so hard on the challenges presented by an edit, that I lose sight of what revision truly is: opportunity. The push that makes us look harder at something, until we scratch away the surface and reveal a character for who they really are. The nudge that compels us to make the hard cuts so other scenes shine brighter, and the pacing of the whole book improves.

Second round revisions and line edits for FLASHFALL

When I was in third grade, an author spoke to us fledgling writers at a Young Authors Conference. He said, “writing is re-writing.” I honestly had no idea what he meant at the time. Fast forward many years, and many books later, and I believed that I had gained a good understanding of that old adage.

But if editing my debut novel has taught me anything, it’s that I had NO IDEA how deeply I’d need to explore the depths of my creative abilities to revise again and again and again.

Sometimes, your editor (or agent or critique partner) may like your writing, but they push you to develop something ‘more.’ That is when you either bang your head against the wall, or you persevere, dig deep . . . and occasionally discover moments, or scenes, or elements that you didn’t know you had in you. The more that can take your story from good to great.

A little over a year until FLASHFALL releases, and it’s really coming together during these final rounds of edits. It’s a book I will be proud to see on the shelf. But it’s not the same book my agent sold last fall. It’s been shaped and stretched into a story more richly layered, visceral, and compelling than I realized it could be from the ‘early days’. The bones were there, but now parts of it feel three-dimensional and ‘alive’ in ways it didn’t before. That is the beauty of revision.

Embrace the act of revision as an opportunity to re-envision a scene, character, or plot point. Then, once you’ve re-envisioned, have the courage to write something new. Sometimes we hold on so tightly to what we’ve written, that we don’t allow for the possibility of what something can be.

For more about this, including some of the best creative advice I ever received, check out my post on Publishing Hub, Don’t Be Afraid To Break It.

After months of waiting, I received my edit letter for FLASHFALL. Since then, I’ve been fully immersed in the Revision Cave. And since my book is about caving, this is more than a metaphor for me—I have literally been down some freakish caverns for the past few weeks! 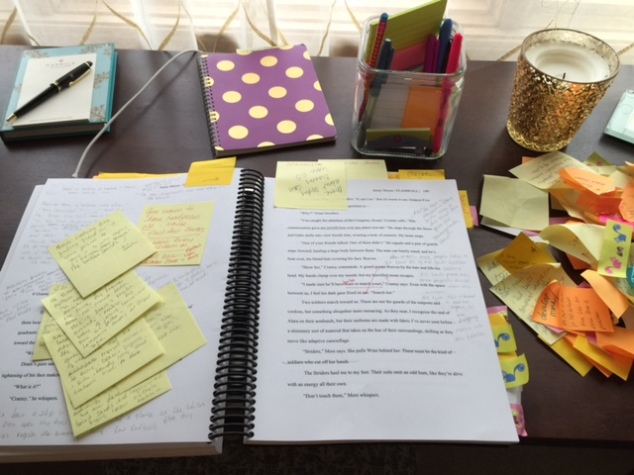 My FLASHFALL manuscript in the midst of structural revisions. Sticky-notes in the pile are completed edits!

I’m currently a week from deadline, (and ironically I’m in my pajamas, messy hair in a bun, sitting beside a bag of chocolate—the author deadline cliché) but thought I’d post a glimpse of what this stage of the revision process looks like. (Ignore the piles of laundry and the fast food bags littering the cave–no judgment during deadline week.)

Every writer has a different process, and mine looks different depending on what stage of revisions I’m in. Since these are first round edits, they are more big idea, structural revisions. Some deal with plot points, shaping and pacing suggestions, and character and world-building development. My edit letter was seven pages long, and I took each one of Kate’s questions/thoughts and printed it on a card that then went on the Revision Board. This helps me keep my revision goals clear as I work through the manuscript and make sure to address each one. 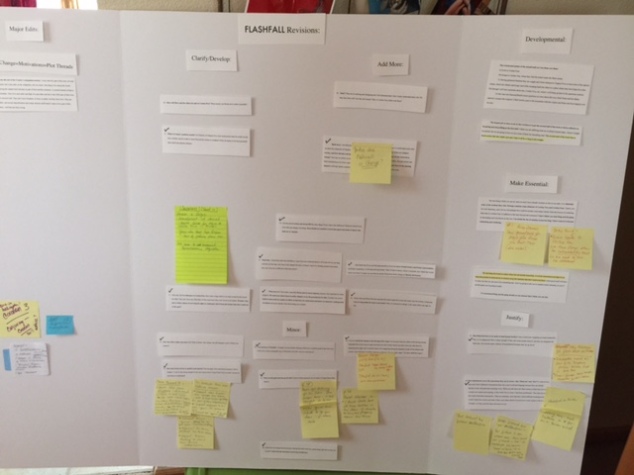 My edit letter broken down and organized according to things I need to cut, add, develop, or change

At this stage, there is a lot of what my agent calls ‘the thinking part of writing.’ When you remove a character or scenes, you have to work through how you’re going to ‘re-connect the dots’ plot-wise and in terms of a character’s arc. I like to explore a lot of this on paper (on a printed manuscript and with tons of sticky-notes) before I alter the actual manuscript on my laptop. Some writers are already working in Track Changes (Microsoft Word) with their editors at this point. I have only experienced that with line edits, and this process works well for me.

After this, I’ll have a second round of revisions to make, followed by line edits, then eventually copyedits. During that time, I’ll probably start seeing some cover designs (EEEE!!) and I’ll continue to work steadily on BOOK TWO. More about all that as the process unfolds . . .

If any of you are in Revision Caves of your own, hang in there! It’s daunting at times, but I’ve found that if you take it note by note, it feels less overwhelming. When I started a few weeks ago, I had over 200 post-it notes stuck to my manuscript and Revision Board. I pulled the last one off yesterday. It was an incredible feeling. But honestly, the best feeling is reading over a new scene that wasn’t there before and feeling the magic in the words, and knowing you were pushed to write something better, with more depth than you had originally.

It’s all worth it. That’s my mantra during revisions. That, and–if you just finish one more you can have a piece of chocolate.

If you need some encouragement, come say ‘hi’ on Twitter. You don’t have to be alone in the Cave. I have lots of chocolate in my little corner over here, and I totally share.

To see a video of me in this process, click here. 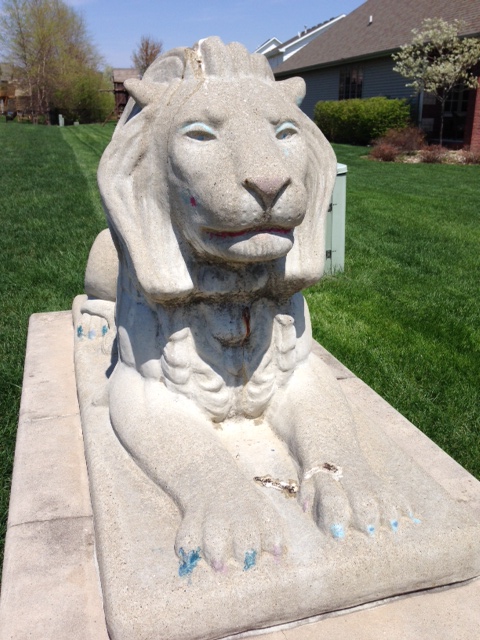 On a recent run, I came across this violated stone lion. Look closely . . . it’s been embellished with blue glitter nail polish, eyeshadow, and yes—lipstick. At first glance, it looked like all the other neighborhood stone lions, but a closer inspection revealed that it had succumbed to a makeover.

Now, personally, I think it’s adorable that some kid took a look at that lion and thought it needed a little something special (sparkles, of course) and that those claws would look better with nail polish. For the purposes of this post, however, let’s call it a non-obvious crime.

Some writing mistakes rear up and smack you on the nose: plot holes, switching tenses, too many dialogue tags, not enough dialogue tags…Grammar, too, is often an easy fix: the right use of its and it’s, lay and lie, and good ‘ol punctuation and spelling. But word overuse is more insidious–often overlooked in first, second and even third drafts.

While polishing my manuscript for submission, I came across a phrase I tend to overuse: ‘my heart pounds.’ And by ‘overuse’ I mean—this pains me to admit—no less than NINE TIMES–followed closely by ‘my stomach twists.’

The worst part is that they’re not even good phrases–‘telling’ writing instead of ‘showing.’ Criminal, indeed.

The good news: I gave my manuscript that close second look (and third and fourth) and caught them. Every writer I know has words and phrases they tend to overuse. It’s the kind of writing crime that can easily go unnoticed (like the glammed-up lion.)

So, as I go through my manuscript and rework these phrases into moments the reader feels along with the character, I’m on the lookout for other such overused words.

Another I caught myself using too much: ‘groan,’ followed closely by its sister, ‘moan.’

Hey, that’s what the editing process is for, right? This is another instance where beta readers and critique partners are so helpful–they will usually see the nine million times you used the word ‘slowly’ and issue you a friendly citation. Better them, than an agent or editor.

If you’re in the revision process, I’d encourage you to do a ‘find and replace’ search (under ‘edit’ in Microsoft word) Type in a word or phrase you find yourself leaning in to, and see if you’ve committed any crimes. Hopefully, nothing as bad as my heart-pounding, stomach-twisting felonies.

My dog, Emmy, has this plastic bone that holds her attention for a few moments at best. It’s knobby, fits in her paws just right, and is good for a brief chew. Then she has these mini rawhide bones filled with “meat”. She will jump and run in circles when she sees one of them, and she digs in until that bone is a soggy mess.

What kind of opening do you have? The market is SO competitive, that if an agent, editor, or reader isn’t digging in to our first few pages with that kind of relish, than they are likely moving on.

Don’t write the plastic bone! Make sure you’re offering your reader “meat” (by way of conflict, strong voice, and compelling hook), that will prove an interesting and irresistible “chew.”

An agent once told me: “If I can put it down, I will. As agents, we can only make time for the books that grab us and don’t let go.”

Like so many of you, I’ve been on the receiving end of this—by way of rejection, or passes on requested pages. It stings. And while the market is truly a subjective one, for the most part a good story is still a good story. So if you’re not getting manuscript requests (from agents who represent your genre) ask yourself: What is missing in my opening pages? If your premise is strong, are you giving your MC’s enough “flavor”—or are they a little too plastic?

Look at the books that grab you. What is it about them that makes you dig in and keep reading? Go back through your first pages and beef them up, till they’re something an agent won’t put down– and your story is one readers will want to come back to again and again.